Skip to content
ISLAMIC STATE MONSTER A U.S. CREATION
The I.S. ‘Apocalyptic Vision’
Ex-General – What if Bangsamoro Revolts?
http://www.sisterraquel.com/2014/08/i-s-monster
eastwind journals 125
By Bernie Lopez
eastwindreplyctr@gmail.com
Permission is granted to re-publish with credits and notification.
Disclaimer – the views in this article are those of the author’s alone.
*******************************
I.S. MONSTER A U.S. CREATION
the lesson is karma
every action, good or bad, triggers a reaction
hate begets hate, love begets love
an eye for an eye triggers ten eyes for an eye
anti-terrorism is a form of terrorism
the extremists on both sides are the culprits
pentagon generals and jihadists
because there are too many wounds unhealed
only the next generations who have no wounds
are the hope for peace – the grave nurtures a flower
they celebrated when bin laden was assassinated
it was not a victory, but the beginning of the end
the greatest danger today is that
I.S. elements are Arab Americans and Muslim Europeans
who will go back to their homelands to sow terror
the enemy is now within
it is no longer just an exported war
they are in the coffee shops we go to
nsa will strangle americans
to find and take out the enemy within
The accumulation of US intrusions in the Middle East in the last two decades has ultimately created a monster called Islamic State (I.S.) The many drones which killed civilians randomly, the illegal tortures at Guantanamo, ultimately catalyzed an international movement beyond anyone’s imagination. The hate-America Arab mindset has gathered momentum. Indeed, Al Queda evolved into a bigger richer better stronger Islamic State in spite of the US trillion-dollar anti-terrorism drive through the decade. In fact, it is ironically the anti-terrorism drive which is now triggering more terrorism.
The Syrian revolution offered the golden opportunity. Today, within three short years, 12,000 Sunnis from 50 countries, including the US, have gathered in Syria to give birth to the Islamic State. Right now, it is achieving massive recruitments of Sunnis in I.S. occupied Sunni enclaves in Iraq and in Syria, in preparation for a final assault on both Baghdad and Damascus.
Now the US is in panic over the very monster of its own creation, a well-armed wealthy sophisticated vicious cross-border I.S. army, whose ranks may double in just one month. The US knows its airstrikes in Northern Iraq, although effective short-term, are futile band-aid solutions. The US is helpless to contain the I.S. because sending troops is out of the question, and airstrikes in Syria may have complications. The US fears that undercover American I.S. members in Syria-Iraq will return to the US to dare the NSA in new creative terrorist initiatives. The Philippines is not exempt. There are reports Filipino Muslims were trained by I.S. in Syria recently. In desperation, the US has to find radical creative solutions, and may have to shake hands with its enemy Assad. It now has a big dilemma.
X 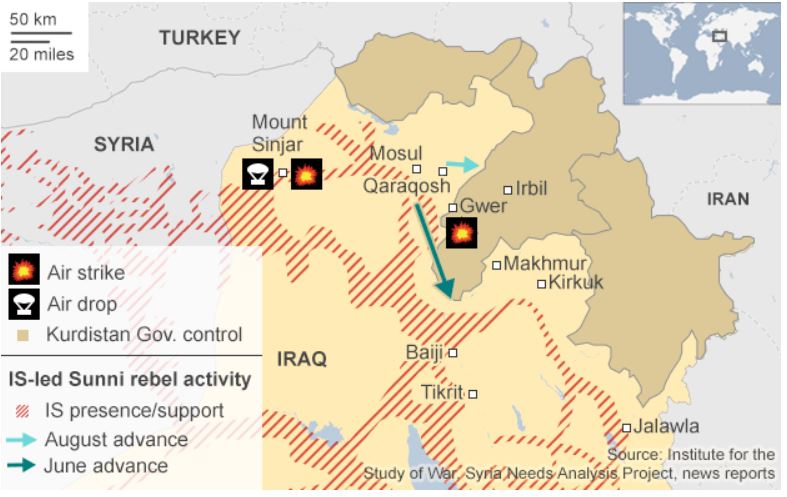 It is important to know the spiritual and psychological evolution of the Islamic State warrior, how it has evolved through the years. Many cannot comprehend how they would behead so casually, massacre entire villages, tell people ‘convert to Islam or die’, such inhuman and vicious actions. Most of the founders of IS have witnessed their families and communities massacred by Americans.

The Western media has labeled the I.S. mindset as an ‘apocalyptic vision’. There is now talk of ‘the third and final jihad’ and the rise of the ‘anti-Christ’. This perverted vision of total vengeance was formed as early as before the Iranian Revolution, an accumulation of protracted violence against the Arabs, or among themselves. The I.S. especially drools over the beheading of Americans, announcing these in the global internet for the world to see.

A second factor in the I.S. growth is the Shiite massacre of Sunnis when they dominated the Iraqi government, in retaliation to Sunni massacres of Shiites during Saddam’s regime. Lately, the bombing of a Sunni mosque left 43 dead. It is a vicious circle of vengeance among Sunnis and Shiites. I.S. has catalyzed an intensified expanded Sunni-Shiite confrontation. It is possible that in the long term, World War III may begin in the Middle East if the I.S. takes over Iraq and Syria and stages a new war versus Iran, the hub of the Shiites. eastwindreplyctr@gmail.com

A retired general asks, “What if Bangsamoro Revolts?”

A retired general asks – what assurance does the BBL give that unscrupulous elements in the Bangsamoro autonomous government will not use their budget to fund a rebel army, if relations with the government deteriorate later on? There are reports that Filipino Muslims were trained by the I.S. in Syria. Is there a possibility of an alliance of these extremists and ex-rebel elements?

A Philippine Star report says “Both parties recognized the importance of having the draft Bangsamoro Basic Law passed on time?” In time for what? Not all angles may be seen right away by fast-tracking. What is the hurry? The ex-general asks – what if?

*****************************************
THE LORD OF MERCY IS THE LORD OF WRATH
I will pour out My Spirit upon all mankind
and work wonders in the heavens and on earth
there will be blood and fire and columns of smoke
the sun will be turned into darkness, the moon into blood
at My coming, on that great and terrible day
all who call on My name shall be saved
in Mount Zion, there will be remnants
in Jerusalem survivors of My choosing
Joel 3:1-5
we are at the brink of a war
which may usher a greater world war
a war which may be an act of God
against a sinful world
a war that will make rivers
turn red with blood
there are only two ways
to avert a God-given war
first, return to the Lord
second, pray for peace and for each other
let us therefore spread this prayer
across the entire planet
o Lord, you are the Wind
i am the sail
bring me ashore
o Lord, you are the ocean
i am the island
embrace and surround me
eastwind
fallen is babylon the great (iraq?)
for all nations (industrialized countries?)
have drunk the wine (oil?) of her licentious passion
the kings of the earth who had intercourse with her
merchants of the earth (oil firms?) who grew rich from her luxury
will all weep and mourn over her
for in a single hour (nuclear holocaust?)
the markets for their cargoes will vanish
their great wealth in utter ruin
revelation 18:2-7 excerpts
amdg